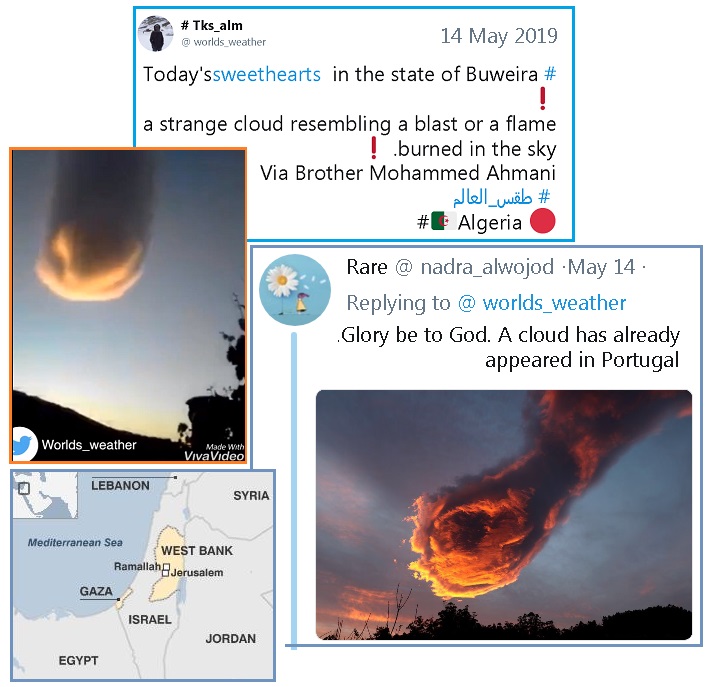 SOZT
As the African Roll progresses, there is yawing open in places along the northern edge of the African Plate, where magma is exposed, temporarily, to the Mediterranean Sea. This causes explosions of steam underwater, along with release of volcanic gasses from the magma, all of which roll up into an apparent plasma ball in the atmosphere. In these two photos, one from Portugal and the other from Buweira in Palestine just to the west of the Dead Sea, the plasma ball is floating, smoke rising from the top.
EOZT

Has this display a message in any connection to European tsunami?
[and from another]
https://www.facebook.com/volkanyolcubal/videos/vb.1657541351176880/...
UFO sighting over Helsinki. SOZT
This legitimate UFO display shows the cross currents of wave action assaulting poor Finland during any tsunami from the Atlantic as a result of the New Madrid adjustment in the US. Helsinki is centered between two bays on either side of Finland, which as lowland has little resistance to the flood tides. An inundation from the left is shown, spreading into both bays, and then a backwash from the right. This backwash is uneven and thus there is a clash and renewed flooding of the bays. This is the telepathic warning being given to those below.
EOZT

What do the zetas say about the huge base in the Antarctic that Linda Moulton Howe has been reporting about with new Navy seal whistleblowers? She speaks of it being millions of years old; of 7 species of aliens; of humans being created by them; hieroglyphs on the site matching others on the Moon. The base is 8 layers of a black basalt material, huge, and was discovered in the 50s. She raises good question of why we aren’t told about it, etc. Also curious about the ‘black sun’ symbol meaning found on the basalt base — similar to crop circles, ancient symbol.
[and from another]
https://www.youtube.com/watch?v=l-MsAA4uZf4
Linda Moulton Howe Live 02/20/2019 Part one and Part Two - Spartan 1, Spartan 2 The stunning testimony of a Navy Seal about what is happening in Antarctica.
[and from another]
https://en.wikipedia.org/wiki/Black_Sun_(symbol)
The black sun is a symbol employed in a post-Nazi Germany context by neo-Nazis and some occult subcultures, such as Satanism. The symbol first occurs as a design element in a castle remodeled and expanded under Heinrich Himmler during Nazi Germany. Whether the symbol had a name or held any particular significance among the SS remains unknown. Its association with the occult concept of the "black sun" (and therefore also its name) developed from the influence of a popular German novel first published in 1991. [and from another]
https://en.wikipedia.org/wiki/Basalt
Basalt is a mafic extrusive igneous rock formed from the rapid cooling of magnesium-rich and iron-rich lava exposed at or very near the surface of a terrestrial planet or a moon. More than 90% of all volcanic rock on Earth is basalt. Basalt is one of the most common rock types in the world. The dark areas visible on Earth's moon, the lunar maria, are plains of flood basaltic lava flows. As we have stated, the Nazis were heavily influenced
http://www.zetatalk.com/orientat/o35.htm
by Service-to-Self aliens, as were the Annunaki. They were promised off-world rescue during the coming passage of Nibiru, and safety in bunkers in Antarctica and South America. Since the Service-to-Self routinely lie, none of this came about, though some remnants of the Nazis did escape to live nervously into old age in South America. What was the meaning of the Annunaki Black Sun symbol? Essentially, emanating from a single source to all parts of the globe or the Solar System. Neither the Nazis nor the Annunaki succeeded in their dominance plans.
EOZT

Prior 1996 ZT: http://www.zetatalk.com/orientat/o35.htm
Rumors of an underground base in Antarctica, where elite members of the Third Reich fled toward the end of World War II, are based in part on the flight of many Nazis to the far reaches of South America. Parlaying on this widely known fact, those who wish to spread myths about alien support of governments engaged in activities generally held to be evil have constructed a story few, if any, could ever disprove. How many people can go to Antarctica and trudge around in search of this fabulous place? A safe, and wholly untrue, rumor. Where aliens in the Service-to-Self orientation did indeed respond to the Nazi call, they in no way rescued the Nazi when matters turned sour.

Prior ZT: http://www.zetatalk.com/ning/02fe2013.htm
When the obvious space port entry in Antarctica was discovered on Google Earth images in October, 2012, we confirmed that Antarctica had been used as a space port for space ships. Our emphatic statement was that early man had never lived on Antarctica, nor were these space ports anything man (such as Admiral Byrd or the NAZI) had utilized. But what about the Annunaki? The Annunaki did not use the space ports, as they did not possess space ships with the capacity to manipulate gravity. But they did explore Antarctica for Gold, as they did the rest of the Earth and Mars. They marked likely spots so their rocket ships could land with supplies. Antarctica was never a Gold rich site, and beyond exploratory probes, did not develop into a mining settlement.

Nancy, a UFO dropping spheres was filmed in the Baltic Sea, Poland.

The Zeta Advise on Locations provides many predictions for this area that include Pole Shift Floods, inundations and tsunamis:  1) Germany/Poland http://www.zetatalk.com/info/tinfx019.htm

My question is whether this is a warning regarding those PS predictions, or something new, more urgent or about to happen, like the New Madrid Adjustment and European tsunami. 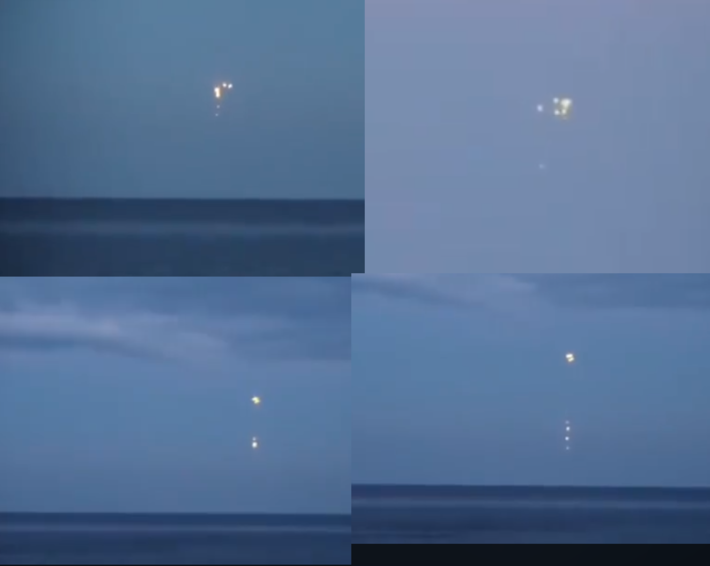 A UFO dropping spheres was filmed in the Baltic Sea, Poland.

The Zeta Advise on Locations provides many predictions for this area that include Pole Shift Floods, inundations and tsunami for Germany and Poland and Estonia/Latvia/Lithuania. My question is whether this is a warning regarding those PS predictions, or something new, more urgent or about to happen, like the New Madrid Adjustment and European tsunami.
[and from another]
https://www.facebook.com/alienufosighting/videos/1670356366429948/
Germany and Poland. 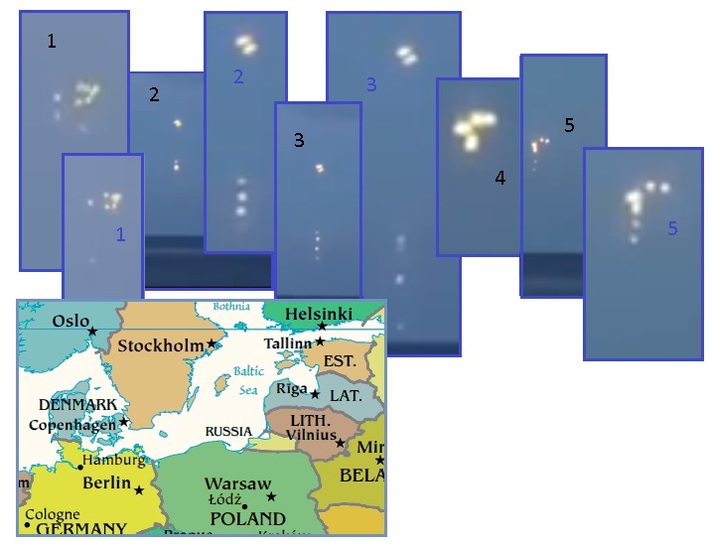 SOZT
If Helsinki can anticipate
http://www.zetatalk.com/newsletr/issue661.htm
tsunami and resulting backwash from many directions as a result of the New Madrid adjustment, what can Poland expect? We have predicted a tsunami 100 foot high
http://www.zetatalk.com/info/tinfx324.htm
striking Denmark, and due to a clash of water
http://www.zetatalk.com/info/tinfx316.htm
from the English Channel and the North Sea, this water will be directed forcefully over and around Denmark and thus into the Baltic Sea. Sweden is high land but the countries to the east are lowland. What happens to this massive amount of water pouring into the Baltic Sea? It will dissipate but not before sloshing repeatedly.

Countries such as France and Norway and the UK anticipate Atlantic storms, and brace for them. The Netherlands and even the city of London have storm doors. But the countries surrounding the Baltic Sea do not think in these terms and assume they are protected from the Atlantic. UFO warnings, pointed and unmistakable, are being given to those below, so they are at least mentally prepared for what is surely to come. The 7 of 10 plate movements are finalizing in Indonesia and S America, and the African Roll is picking up the pace. The New Madrid will be next.
EOZT

Prior ZT: http://www.zetatalk.com/info/tinfx019.htm
The lowlands of Germany suffer from inundations both during the tidal waves that will assault the coast and as a result of melting poles.

Prior ZT: http://www.zetatalk.com/info/tinfx316.htm
The thrust northward will continue and will assault the coastline of the UK directly, and secondarily the coastline of France and Norway. France can anticipate a tsunami of 100 feet, Spain perhaps 30-40 feet, the UK 200-300 feet, and Norway 50-75 feet. The full brunt of the tsunami that strikes the UK will also wash through the English Channel, entering the North Sea, and clashing with any flow coming down from the Norwegian Sea. The lowlands in the North Sea can expect a tsunami an estimated 100 foot high. The speed and force of the tsunami as it reaches these lowlands will be lessened, however, so blockades such as storm doors may be somewhat useful in countries such as the Netherlands.

Prior ZT: http://www.zetatalk.com/info/tinfx324.htm
Denmark will be devastated by a 100 foot tall tsunami that will roll over this flat country.

As is our usual practice, we are closing this May Q&A and opening the next month of June. Please post your questions there. Thank you. (http://poleshift.ning.com/forum/topics/zetatalk-chat-for-june-30-2019)