Image with much details are you agree? Good analyze please, Nancy. SOZT
The Monster Persona is caused by light rays going outward into space being captured by a gravity sink, and thence bent back toward that gravity sink. Normally, when objects are close to Earth, these will show up as a single Monster, as Earth is the only gravity sink nearby. This was the case for recent looming Venus monsters, and Dark Twin monsters. But Nibiru is farther afield, at a greater distance. Nibiru lies to the right of the Sun, in the view from Earth, and the Dark Twin is to the left, in the orbit shared with Earth. Thus light rays going in the general direction of Earth will likewise be attracted to bend toward the Dark Twin.

Venus is between Nibiru and the Earth, caught in the cup of particle flows in the Solar Wind coming round behind Nibiru. Where mankind thinks Venus is going round the Sun, it is going back and forth in front of the Sun, pushed there by benign aliens directed to simulate the Venus orbit for man, so those unaware of Nibiru as yet do not go into a panic. Thus light rays coming from Nibiru and spreading out into space may be deflected by Venus, the Dark Twin, or the Earth, and those light rays coming close to the Earth will suddenly bend in that direction even if previously deflected.
EOZT

It's bad, really really bad! I had read sources in Russian and think, it was sabotage. Guards of Kemerovo shop blocked attempts of volunteers to rescue people, even children. Fire Alarm was disabled by single guard. Fire exits were blocked by other guards. Definitely, it was planned action! STS group or something else?
[and from another]
All Russia grieves on alive to the burned-down people in Winter Cherry shopping center in the city of Kemerovo. Many small children have died. Couldn't shed Zeta light on this tragic event whether there was it act of terrorism, and statements of the authorities for the reason of ignition and the number of victims are how truthful?
[and from another]
https://www.rt.com/news/422311-new-fire-kemerovo-mall/
Fire breaks out again at Kemerovo shopping mall, day after deadly blaze killed at least 64. The smoldering debris prompted a new phase of the fire, Russian Emergencies Minister Vladimir Puchkov told reporters. Firefighters are tackling the flames, with temperatures reaching 600-800 degrees Celsius in some places
[and from another]
https://sputniknews.com/russia/201803261062896122-fire-russian-shop...
The first reports of the fire surfaced on Sunday afternoon; the police encircled the area and began evacuating people. The emergency services reportedly deployed some 15 fire teams, while the national center for crisis management announced that over 660 people were engaged in emergency response activities. Witnesses have insisted that fire alarms in the trade center, which was completely packed, failed to go off, causing people to panic and rush through narrow corridors in a movie theater and children’s playground, filled with black smoke; some jumped out of windows to save their lives. Russia’s Investigative Committee has launched a criminal investigation into the case, having reportedly arrested four suspects, including the head of the management company, servicing the shopping mall. An employee of a private security company (PSC) switched off an alarm system in a shopping mall in the Siberian town of Kemerovo.
[and from another]
http://tass.com/politics/996169
The Russian authorities are not considering a terrorist act as a cause of Sunday's calamitous fire in the Zimnaya Vishnya shopping and recreation center in the southern Siberian city of Kemerovo, the Russian Minister of Emergency Situation and Civil Defense, Vladimir Putchkov said.
[and from another]
https://en.wikipedia.org/wiki/Terrorism_in_Russia
Islamic terrorism is a recent threat to the security of Russia, with most terrorist activity taking place in Chechnya and Dagestan. Since October 2007, the Caucasus Emirate has withdrawn its nationalist goals of creating a sovereign state in Chechnya. It has since fully adopted the Islamic fundamentalist ideology of Sunni jihadism. A Chechen FSB (Russia equivalent of CIA) agent directed the Moscow theater hostage crisis in 2002. In December 2013, two separate suicide bombings a day apart targeted mass transportation in the city of Volgograd, in the Volgograd Oblast of Southern Russia, killing 34 people overall, including both perpetrators who were aligned to Caucasus Emirate.  On 3 April 2017, a terrorist attack using an explosive device took place on the Saint Petersburg Metro. Seven people (including the perpetrator) were initially reported to have died, and eight more died later from their injuries, bringing the total to 15. 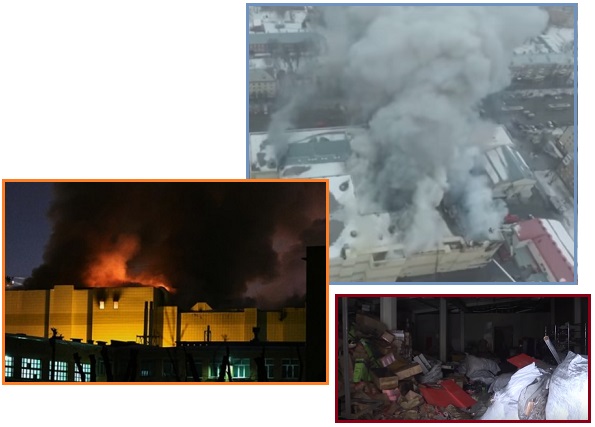 Officially the cause of this fire will be found to be incompetence in the private security company which will claim it accidentally switched off the alarm as it thought the alarm was bogus, an alarm malfunctioning. But why then was the alarm not switched back on, when smoke and heat was obvious? This guard was bribed and the fire deliberate. Kemerovo is in the heart of central Russia, in the highlands that will provide a land bridge to the highlands of China and the Far East to drowning Russians after the Pole Shift. It could also be a land bridge for ambitious Europeans.

Where most terrorism in Russia is due to Chechen rebels or those within the Russian Foreign Service sympathetic to the Chenchen cause. Just as the US has its Deep State players in the CIA pushing their own agendas, Russia has the FSB. The Soros group was responsible for the St. Petersburg bombing in 2017, trying to trigger WW III. They are again at the helm of the Kemerovo fire, trying to disrupt the land bridge for Russia and China, leaving it open for a takeover. Note that Kemerovo is directly in the path of the new Silk Road railroad being developed by China and Russia.
EOZT

Prior ZT: http://www.zetatalk.com/ning/08ap2017.htm
The Soros family and those wanting the West to go to war with Russia have billions at their disposal, and such funds have been known to bribe activists when it is promised that the family, or the cause, will be rewarded regardless of the outcome. Why was St. Petersburg targeted? The location is within the realm of NATO countries, which lie on all sides – Finland to the North, Estonia and Latvia to the South, and the Baltic Sea to Sweden and Poland to the West. Soros and his partners expect Russia to react by an increased military force by land and sea, thus triggering war with these NATO states. Who did the bombing? Soros, and others within NATO who were sympathetic with this cause.

Rolling to April Q&A, and closing out the March Q&A. Please post your new questions on the chat for April. Thank you.