Twitter reportedly nearing deal to sell itself to Elon Musk

Twitter is said to be nearing a deal to sell itself to Elon Musk, according to The New York Times and other outlets, 11 days after the Tesla and SpaceX CEO shocked the industry by offering to buy the company in a deal valuing it at more than $41 billion.

A deal could be finalized as soon as Monday, according to the Wall Street Journal. Twitter declined to comment on the reports.
Reports that a deal is imminent come after Musk revealed last week he had lined up $46.5 billion in financing to acquire the company. Twitter's board met Sunday to evaluate Musk's offer to buy all the shares of the company he does not currently own for $54.20 a piece, a source familiar with the deal confirmed to CNN. The source said that discussions about Musk's bid have turned serious.
What is this about?

What is this about? SOZT
Elon Musk has made no secret of his feelings about the Twitter Bots and repressive mindset of the moderators at Twitter. He himself has run afoul of them and resented it. But in that the Junta currently has Musk in custody for allowing his Boring Company to assist Epstein in the past, what is the full agenda here. Cleaning up the Satanist Cabal in the Western world is an immense task, which the US Junta and the White Hat Alliance in Europe have undertaken. But they are winning, and the results are beginning to show.

The Junta agenda includes righting the wrongs of the 2020 election fraud. The Junta would prefer not to incite a civil war, but as we have repeatedly stated if they declare Martial Law due to the pending New Madrid rupture then announcing that President Trump continues to be the President could be done with scant notice by the public. The public will be too distracted for political riots. The fake news media and free speech on social media have been some of the key issues to be corrected. Thus instructing Musk to spend some of his monies on Twitter is just part of the process.
EOZT

Prior ZT: http://www.zetatalk.com/ning/30ap2022.htm
We mentioned in March 2020 that Musk was before the Tribunals for allowing his Boring machines to assist those interested in Moloch worship. Anything for money, was his philosophy. Musk’s face showed the look of fear then, and since then has changed. Musk is not needed for technical leadership of SpaceX, so has been held at Gitmo while trying to bargain himself out by agreeing to do tasks for the Junta. His ill-gotten funds were seized, but in that the public thinks of him as a very wealthy man he had plenty to buy a controlling interest in Twitter, which the Junta now controls.

Per Volcano Discovery there was “reported shaking” at Murphy’s Settlement on April 27. This is a location in the hard rock across the Mississippi River from St. Louis. Then later that day at Kankakee, Illinois a 3.8 with shaking was recorded by Volcano Discovery and at Milwaukee more shaking that day too. Since when does shaking replace the quaking of an earthquake?
[and from another]
Kankakee
https://www.facebook.com/photo/?fbid=167186829071893&set=pcb.16...
Was reading a book then the whole house started shaking; Rumble and shaking sitting in a chair in the house; sounded like thunder.
[and from another]
Milwaukee
https://t.me/ZetaTalk_Followers/12998
Felt like a very large train passing but in waves

SOZT
Snapping or lurches from rock strata being pulled apart or pushed together will cause an earthquake jolt or boom. But what would cause the shaking and rumbling being reported above the New Madrid Fault Line as it turns at the Wabash Seismic Zone to head East under the Seaway? These areas have hums, such as the Detroit hum and one that can be heard in Wisconsin when it is under pressure to pull apart. Shaking is a step up from the vibration of a hum, but the rock has not yet adjusted.
EOZT

Until now, the tragic death and subsequent sinking of the flagship of the Black Sea Fleet, the missile cruiser Moskva, is shrouded in mystery. Was it really an accident with a fire and subsequent detonation of the ammunition load, or was effort made to his death NATO countries?
[and from another]
Russia Reveals Crew Losses from Sunken Warship
April 22, 2022
https://www.rt.com/russia/554362-sunken-warships-crew-losses/
As a result of a fire on April 13, the Black Sea Fleet flagship Moskva was seriously damaged due to a detonation of ammunition. One serviceman died and another 27 crew members went missing, and attempts by the crew to put out the fire were not successful. The remaining 396 crew members were evacuated from the cruiser to other ships of the Black Sea Fleet, in the area, and taken to Sevastopol. Ukraine has claimed that the ship was struck by its missiles.  The Russian military earlier announced that the Moskva sank while being towed to port amid poor sea conditions. The Defense Ministry said that the warship’s hull had been damaged by an ammunition explosion that was caused by an onboard fire. The head of the Odessa region’s military administration, Maxim Marchenko, claimed that “very serious damage” to the Moskva had been caused by Ukrainian Neptune missiles fired from Odessa.
[and from another]
Fire Aboard Russian Warship Contained – Moscow
April 14, 2022
https://www.rt.com/russia/553862-moskva-fire-warship-ukraine/
The flagship of the Black Sea fleet, which is taking part in the country’s military operation in Ukraine, remains afloat. Its main missile armaments haven’t been affected by the blaze. The Atlant-class guided missile cruiser, which was commissioned in 1983, carries 16 anti-ship missiles and many more air-defense missiles, torpedoes and guns. Measures are being undertaken to organize the towing of the 12,490-ton vessel to port, the ministry said, adding that the cause of the fire being investigated. Several Ukrainian officials had earlier boasted that a battery of their Neptune anti-ship missiles hidden in the area near the port town of Odessa had successfully struck the Moskva twice, setting it ablaze. However, they provided no proof if their claims, with the images of the burning vessel distributed on social media turning out to be fake.
[and from another]
Russian Flagship Sinks – Military
April 14, 2022
https://www.rt.com/russia/553902-flagship-sank/
The Russian missile cruiser Moskva, the flagship of the Black Sea Fleet, sank while being towed into port amid poor sea conditions. According to the Russian military, the warship’s hull had been damaged by an ammunition explosion, itself caused by a fire on board. However, Ukrainian officials claimed their forces had struck the vessel with anti-ship missiles. The Pentagon said it could not confirm the claim. 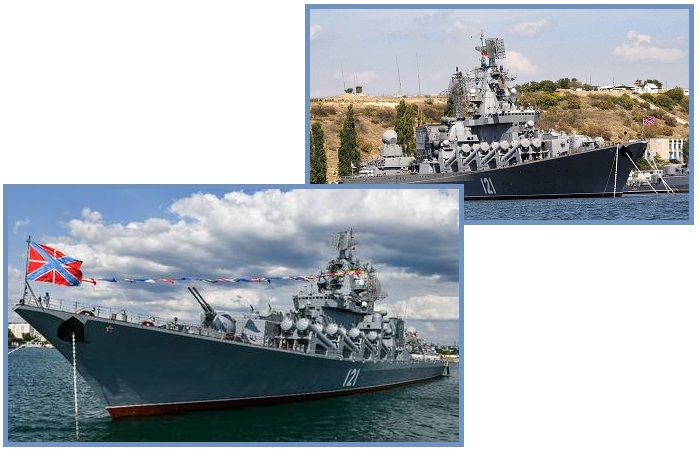 SOZT
What caused the Moskva to sink? It was certainly not Ukraine missiles, though they tried to take the opportunity to claim a victory. The Moskva had been in operation since 1983, so had aged. Like all cars and trains and elevators that have parts that fail due to aging, the solid warship was a candidate for retirement. Fires start from shorting wires, and any fire near ammunition will cause explosions, and a fractured hull will result in a sinking vessel. Had it not been for the action in the Ukraine, the Moskva would likely have been quietly put to sleep before this accident occurred.
EOZT

As is our usual practice we are closing this April Q&A and opening the May Q&A. Please post your questions there. Thank you.